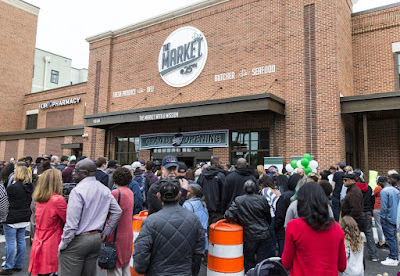 Steve Markel said he and his wife, Kathie, are trying to make a difference in Richmond’s East End.
The couple are financially backing a mixed-use development in north Church Hill that includes a new 27,000-square-foot grocery store, a culinary school operated by J. Sargeant Reynolds Community College, retail and office space, and 42 apartments.
“This is not a typical real estate project where one expects to get rich. This is a not a typical real estate project where one hopes to make money,” Steve Markel told the 150 people attending a breakfast meeting of the Greater Richmond Association for Commercial Real Estate held at the Country Club of Virginia.
“This is truly a philanthropic operation,” said Markel, the vice chairman of the Henrico County-based specialty insurer Markel Corp. “My goal in this project is to lose as little money as possible. One important point is for the long-term sustainability for the project. It is important that the grocery store, which is the center of this project, becomes self-sustaining.”
The Market @ 25th grocery store opened three weeks ago at North 25th Street and Nine Mile Road with a pharmacy, deli, fresh fish and seafood, sushi counter and salad bar. A credit union branch is expected later.
“A lot of sweat equity will go into making this happen,” he said. “For it to stay in place for the next 10, 20 and 30 years, it doesn’t have to make a lot of profit but it does need to be financially viable.”
It is too early to say how the store is doing, but Markel is pleased with the initial results. “The community reception has been very positive.”
Markel said he and his wife decided to look at the poverty issue in Richmond’s East End and find a way “we could make a difference.”
That part of Richmond, he said, has the highest concentration of poverty on the East Coast between Philadelphia and Atlanta. “It is sad that we have let that evolve like that.”
It also is home to four large public housing communities — Mosby, Whitcomb, Fairfield and Creighton courts. And the life expectancy in that area is 62 years old compared to suburban neighborhoods where residents on average live beyond 82 years old.
“We had two goals,” he said about the couple’s plan.
“Try to make the neighborhood healthier with a grocery store and fresh food. And to provide jobs. The store employs about 100 people, which has an impact on jobs in the community. The second goal for Kathie and I was to get more engaged in the community about the problems that exist and get a great understanding of the issues,” he said. “The first goal has not been met, but the second one certainly has.”
The grocery store is part of the Church Hill North project that the Markels are developing.
The building for the culinary school operated by J. Sargeant Reynolds Community College is under construction and should be ready in early 2020, he said.
It will have state-of-the art culinary kitchens, classroom space, offices and a greenhouse facing Nine Mile Road.
A 5,000-square-foot restaurant is planned for the fourth floor of the building that Markel said will have “absolutely incredible” views of downtown Richmond.
Attached to the grocery store are The Flats @ 25th apartments, a 42-unit complex that is above the store, and the VCU Health Hub @ 25th community resource center. Residents started moving in last weekend, Markel said.
ggilligan@timesdispatch.com
(804) 649-6379
Posted by Reynolds Community College at 8:40 AM