From Cheri Morrell, a JSRCC LEAD student, on her recent visit to the Virginia General Assembly during VCCS Community College Day. 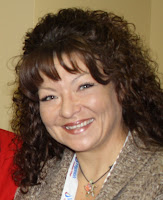 Our adventure began with an early morning meet up at the JSRCC Downtown Campus. The JSR Lead (student leadership development team) representatives for this particular visit were: Zac Carroll, Ryan Harris, Kelly McIntosh, Angela Miller, Cheri Morrell, and Shane Roberts. Dr. Rhodes, Malcolm Holmes, Steve Vehorn, and Bess Littlefield were kind enough to brief us of the protocol and events of the day while we waited for our transportation. Next up was a quick ride over to the Library of Virginia for some history of the LVA, the Capital Building, an explanation of state government and the General Assembly itself - then we were off for our perilous journey across the street to the General Assembly Building. While there we were fortunate to meet privately with several delegates including Delores L. McQuinn, John A. Cox, John O’Bannon lll, Peter Farrell and senators Thomas Garrett, Jr. and Henry L. Marsh.  Shane Roberts in the automotive field of studies was a big hit with Senator Garrett and Delegate Farrell as both requested tours of the JSRCC campuses with Dr. Rhodes! The icing on our cake was the opportunity to sit in the gallery during an actual General Assembly session where we were not only announced and asked to stand, but applauded by the House of Delegates!  It really doesn’t get much better than that, folks. We then finished off our day with a lovely stroll back across the garden area and enjoyed a leisurely lunch; it was a fun-filled, educational day…J. Sargeant Reynolds style!

“I think it is important for me to get an associate degree,” noted Shane. “By earning an associate degree, it shows employers that I know how to do math, that I’ve passed courses in English and know how to do critical thinking and speaking in front of groups. Those are important skills.”
A mother of two, Angela Miller discussed with Delegate Peter Farrell (R-56th District) that she hopes to transfer to the University of Richmond and become a special education teacher. “Reynolds has given me an opportunity I can afford, as I take the first steps toward my degree to teach.”
Angela and Shane were joined by fellow students Zac Carroll, Ryan Harris and Kelly McIntosh.
Following the morning visits, the students walked to the Virginia State Capital where they toured the building that holds the nation’s oldest legislative body. During the general assembly session, the group was introduced and welcomed by Delegate John O’Bannon (R-73rd District).
Posted by Reynolds Community College at 12:56 PM 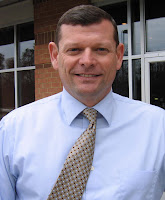 When John Lewis explains that he’s a liaison officer with the Joint Warfare Analysis Center (JWAC), it’s easy to believe.  At a buff six feet, he has the physical presence that would surely come in handy during a deployment to Afghanistan. Yet, it is John’s advanced degrees in electrical engineering that landed him in a warzone.  Back in Dahlgren, VA he is vague on the details of his job – those are classified – but offers this guarded explanation: “We help war fighters solve very hard problems using math, engineering, data and intelligence.”  As a liaison officer, John says he translates engineering “geek speak” into more manageable terminology for soldiers.
While John won’t divulge details about his assignments at JWAC, what he will tell you is how pleased he is with the education he received at Reynolds. “I’m a community college guy.  That’s how I started.  I took vocational classes in high school, and plenty of study halls.  I didn’t plan on going to college, but my time in the National Guard proved to me that I could do hard things.  I decided to enroll at J. Sarge, and it was the best thing I could have done.”
Using his G.I. Bill, Pell grants, and “every scholarship I could apply for” John began on a different kind of adventure.  He credits the basic-level course offerings, small class sizes and, particularly, the interest of the professors with much of his success.  “One of my professors told me that I had picked up electronics so well that I should consider becoming an engineer.” Which he did; after earning his associate’s degree in ‘95, John transferred to Virginia Tech to earn his bachelor’s degree in engineering.  “When I first got to Tech, I was pretty nervous.  You know, could I compete with these Tech students? But, with what I’d learned at Reynolds, I was so well prepared, it was incredible.  I finished with a 3.97 GPA.  I think I had one B+ my entire time.  And, this is from someone who had started at Reynolds taking remedial Algebra 1.”
Eventually, he would earn his master’s in engineering, but John can still quote formulas he learned at the College in Dr. M.L. Foy’s physics class.  “She was one of the most thorough and best professors I’ve ever had in any university I’ve attended. Dr. Foy taught concepts beyond the abstract.  These were real world examples we learned.” Examples that he applies to the classified operations of JWAC:  “Ultimately, we’re using science to win wars.”
Posted by Reynolds Community College at 7:07 AM 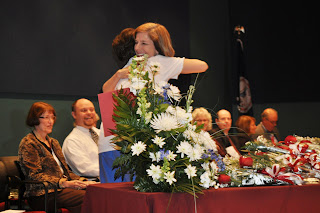 View pictures from the recognition ceremony
Posted by Reynolds Community College at 7:05 AM