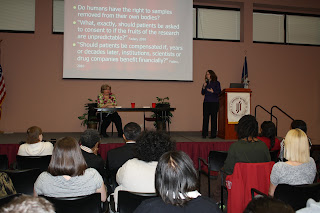 More than 80 J. Sargeant Reynolds students, faculty, staff, and guests enjoyed the Around the World through Books discussion of The Immortal life of Henrietta Lacks on Thursday, March 29.
Carol Rodi from Reynolds’ School of Nursing and Allied Health and biology professor Janet Adams led a lively discussion about the poignant, true-life story, written by Rebecca Skloot, of the contributions to science and medicine from cells taken from Henrietta Lacks in the 1950s. Originally from Clover, Virginia, Henrietta Lacks underwent cancer treatment at Johns Hopkins hospital in Baltimore, where some of her cancer cells were removed and tested. The cells continued to survive and for more than 50 years have offered opportunities for ongoing research. In the 1970s the Lacks family learned about the existence of Henrietta’s cells, and as the cells had begun making a significant amount of money for labs that marketed them, ethical, business, and legal questions arose around the rights of the family to compensation for the cells.
Known as HeLa cells, the cells continue to be widely used in research and health care today, and the ethical, business, and legal issues around cellular research are also ongoing.
At Thursday night’s event in the Gallery on Parham Road Campus the presenters and audience discussed some of these issues, including questions of informed consent and how it has changed over the years, the funding and business of modern scientific cellular research, and ethical concerns surrounding these topics.
Sponsored by the Multicultural Enrichment Council, this was final event in this year’s book discussion series.
Posted by Reynolds Community College at 8:35 AM 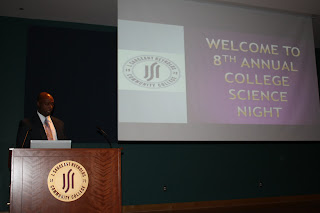 “It was a wonderful setting for our students, faculty, staff and neighbors from the community,” said Raymond Burton, Dean of the School of Mathematics & Science. “Our committee and presenters worked hard for this special evening and I am glad they had such a large and interactive audience.”

Professor David Walz opened the session with his presentation “America the Beautiful” that included an array of photos taken while traveling across country. During the slideshow, Walz declared himself as just a regular guy that enjoys traveling and taking pictures with a cheap camera. “I let mother nature provide all the majestic views for me,” he noted.

Walz shared that one of America’s the best kept secrets is the falls in Great Falls, Virginia located outside Washington, D.C. “When I first saw them, I thought I was in the western part of the United States,” added Walz, who also shared that he and his wife try to see all 48 lower continental states every 10 years.

The evening’s second presenter, Dr. Bryan Rhodes, elaborated on his topic “Being Skeptic of Skeptics: Is there evidence for Climate Change?” Dr. Rhodes challenged the audience to focus on the facts and think past what they are hearing in the news and their preconceptions.

“When you think about climate change, that is a vision, as none of us have been completely around the world to see all the effects,” noted Rhodes. “Climate does change – why it changes and what effects humans have on that change is still the big question. Some of it (global warming) is natural. How much we are contributing to this phenomenon, is what we don’t know.”

Professor Brian Dunn closed the evening with his presentation “Germany: A Nation Transformed, Enraptured, and Devastated by Science” that featured a collection of German scientist and how their discoveries effect the world even today.

“The turn of the last century was a period of great political unrest, but at that same time, governments of ambitious powers invested heavily in scientific research and technology development for several reasons,” Dunn said during his opening. “They wanted to improve their economy and also wanted to politically and economically influence other nations.”
Posted by Reynolds Community College at 8:29 AM