to Document the COVID-19 Crisis 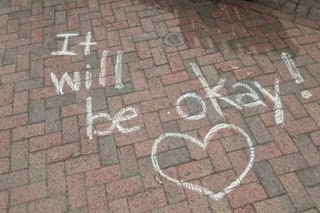 During the COVID-19 crisis Assistant Professor of Paralegal Studies Melissa Ansley Brooks has been keeping an audio diary that was recently featured on VPM.

Here is an excerpt from Melissa's audio diary: 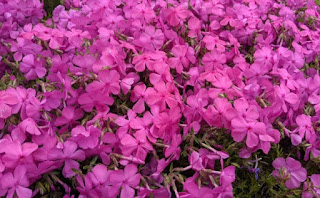 This is the end of day one of social isolation. We made it through on a wing and a prayer. I did all the recommended things today, perhaps they were not meant to be done all in one day because I'm feeling physically and emotionally exhausted, working full time from home and trying this homeschool thing and still being a loving and attentive mother and all the things. I'm just kind of feeling the weight of it today.


So, like I said, I'm really going to rethink what I try to accomplish for tomorrow, and give myself a little bit more grace, and a little bit more space to figure all this out. I think we're all just trying our best. I was able to speak to my Grammy today who is 91 living in an assisted living facility in Iowa, where she's on complete lockdown and not even receiving mail at this point, and taking all of her meals in her room. But she did tell us about a game we can play where you hide a button in the house and go look around So we might put that on the roster for tomorrow. For now, we're just gonna pack it in and call it a night.

You can hear Melissa's complete audio diaries via VPM's Soundcloud page.
Posted by Reynolds Community College at 7:11 AM 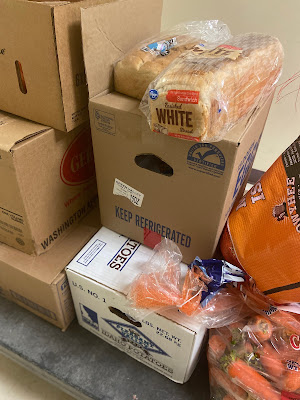 With classes going online, Reynolds Culinary Arts program had a host of items on hand . . . eggs, cheese, fruits, vegetables, bread . . . so they quickly got in touch with FeedMore and emptied out the kitchen.

Within one day, the items were sorted, counted, boxed, and delivered. 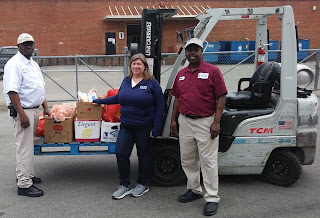 Reynolds Chefs and staff know how to mobilize and get things done! 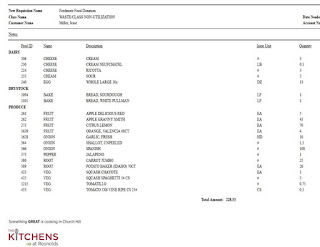 Posted by Reynolds Community College at 6:49 AM

to Meet the Commonwealth's Desperate Need 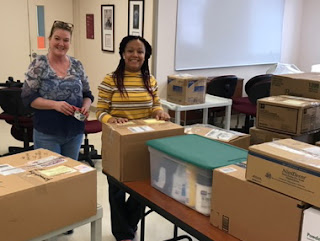 If your classes have been moved online, and your labs are now conducted virtually, what do you do with your unused resources?

Resources that are urgently, no desperately, needed NOW to battle the COVID-19 crisis that's daily closing in on our community.

You pack them. And, you send them.

That's just what Joy Kolovich and Taelor Poindexter did this week. They emptied Reynolds Nursing and Science department cabinets, scoured the classrooms and offices for boxes and tape, and went to work. 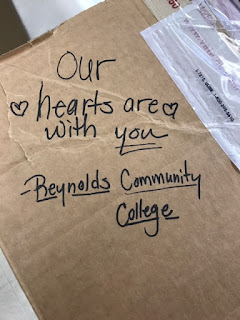 
Reynolds Facilities staff took over the project once Joy and Taelor were done and the supplies were boxed and ready. They loaded the boxes, rolled them to the loading dock, and lent a hand moving them on to Henrico County vehicles. 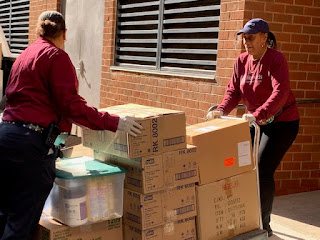 Henrico County is the regional coordinator for the COVID-19 medical supply donations. While we don't know exactly where Reynolds items are headed, we do know they will be filling an urgent community need.

Our special thanks, and our hearts, go out to all those helping to mobilize supplies, and all those in need of supplies.

We are all in this together.

Posted by Reynolds Community College at 10:30 AM 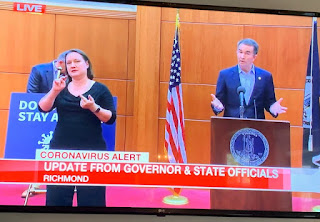 "I am humbled by your interest in my interpreting," Carrie Humphrey wrote at the beginning of her email.

As part of the Commonwealth's COVID-19 Response, Reynolds
ASL&IE Faculty and Program Head, Carrie Humphrey is one of two interpreters chosen to stand on the podium with Governor Ralph Northam as he delivers his video news briefings during the COVID-19 crisis.

Carrie took time to answer a few questions by email about what it's like to serve as an interpreter during a crisis situation. Here is what she shared:

How were you chosen as one of two of the Governor’s interpreters?

The Virginia Department for the Deaf and Hard of Hearing maintains a list of certified interpreters who are willing to be called in emergency situations and I am on the list.  March 12th, I received a phone call that the Governor was going to speak in less than an hour and the coordinator was looking for an interpreter.  I was finishing up my office hours on the Downtown campus and was able to walk over to the press conference in time.

What is it like to be on set with the Governor and his staff?

Everyone on set is professional and courteous. He and his staff are a pleasure to work with.

You are so calm and controlled on camera. Were you ever nervous? If so, how did you overcome it?

I am incredibly nervous each time I go and am grateful that part of interpreter training includes managing our professional presence. I pre- and post-conference with my team interpreter regularly so that we can provide consistency in sign choices and how we interpret the information. The ASL community in Virginia is also very supportive. It is comforting to get messages of encouragement from Deaf friends, interpreters, and Reynolds colleagues.

What part of this experience is most useful to share with your students?

One of my biggest mental distractors each time in front of the camera is knowing our students will see the interpretation. I'm happy to have had candid conversations with our interpreting students about the experience and share the thought process behind interpreting choices. The biggest lessons from this experience have been the reminders to stay prepared for last minute calls and focus on conveying the message clearly in the midst of emotional stresses.

Carrie, you say you are humbled by our interest in your service! We are humbled to see you on the frontline serving all Virginians in this time of crisis. We thank you, and the Reynolds community is proud to have you as our representative. Please stay safe. We are with you.

Posted by Reynolds Community College at 7:36 AM

For this Culinary Student 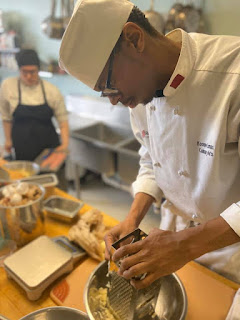 Later, at Armstrong High School, when given the chance, Keonne took his first culinary arts class, Culinary Arts 1. In 2016, his Junior year, he took Culinary Arts 2. That year he was offered a kitchen position at Peter Paul Development Center preparing meals for the staff and for the Center's after school program. The offer was a perfect fit. Keonne had been going to Peter Paul's after school program since his 4th grade year.

In 2017 Keonne graduated from Armstrong. By the spring of 2018 he was enrolled in Reynolds Culinary Arts program. "It was like coming home," Keonne said of his decision to come to Reynolds. "It was easy to access. Comfortable. I was instantly drawn to Reynolds."

Keonne doesn't bemoan his full schedule. "I work all day Monday, Wednesday, and Friday. I'm in class all day Tuesdays and Thursdays from 8 a.m. to 9 p.m. I have American Regional Cuisine, my favorite class so far, until 3:30, I get about an hour break, then I have Food and Beverage until 9 p.m. I do homework at night and on the weekends." 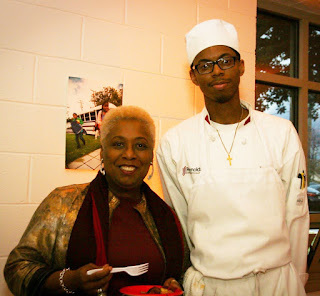 Perhaps watching Gordon Ramsey in action prepared Keonne for his long days and the multitude of tasks he would be asked to perform in the kitchen. His attitude and outlook are overwhelmingly positive and focused. "I love to do everything," he says without the slightest hesitation, "learning about different cuisines and cultures is fun stuff." No doubt, he has found his niche.

Keonne expects to take his last class, his Capstone class, in the summer of 2021 and graduate from Reynolds that fall. What's next for him? "In the short term I'd love to get into catering," he says, "then I'd like to be a traveling Chef, traveling around the country, then around the world. I'd like to go everywhere."

Given his drive, enthusiasm, curiosity, and desire, it's easy to picture Keonne going "everywhere".

Posted by Reynolds Community College at 7:32 AM 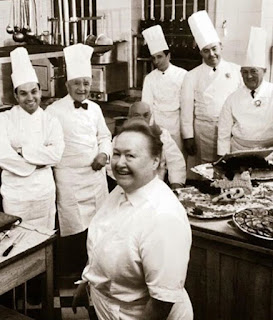 Eugénie Brazier, known as "la mère Brazier", (12 June 1895 – 2 March 1977) was a French chef who, in 1933, became the first person to attain a total of six Michelin stars, three each at two restaurants: La Mère Brazier on Rue Royale, one of the main streets of Lyon, and a second, also called La Mère Brazier, in the Alpine foothills at Col de la Luère. She was also the first woman to earn three Michelin stars.

“Mere", the French word for “mother”, was an honorary title given to talented female professional cooks in France during the 18th, 19th, and 20th centuries.

Her cooking attracted celebrities like Marlene Dietrich and Charles de Gaulle, but unlike her male peers, she never wanted to be considered a celebrity chef. Brazier began working on a cookbook two years before she died in 1977, but never finished it. La Mere Brazier: The Mother of Modern French Cooking was finally printed in 2009 with the help of her family.


Looking back, it now seems like the 1930s were a far more tolerant time for women in Michelin history. Just one generation later, the man who would become the king of French cuisine, Paul Bocuse, would famously say during an interview in the 1970s that he would rather have a woman in his bed than behind the stove in his restaurant. That sentiment ushered in a period of skepticism toward women chefs that is still with us (if you think cutting women out of history is a problem of the past, just consider contemporary restaurant rankings of today). The Michelin guide followed Bocuse’s lead, and 50 years would pass before another woman (Anne-Sophie Pic) received the three-star honor.

Now is the time to study Culilnary Arts!


Now is a great time for women to study Culinary Arts.

Consider this: less than 7% of Executive Chefs at leading culinary institutions are women.

The field is wide open! The opportunities are endless!

Consider these statistics gathered in 2016:

Posted by Reynolds Community College at 10:51 AM 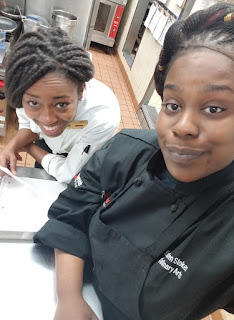 What motivated you to study culinary arts?
I would have to say passion is what honestly drove me to pursuing my studies. I was stuck in a 9 to 5 that was draining the life out of me. I've always had a love for cooking and decided that it was time to start my culinary journey.

Where are you in your culinary studies?
I'm currently in the second year of my program.

What are you working on now?
Currently I'm working on finishing this semester out strong. When I am able to get some free time I love to try different baking recipes.

What is your favorite task as a culinary student?
My favorite task would have to be learning new things and working with ingredients that I wouldn't normally cook with.

Do you have a “signature dish”?
I currently don't have a signature dish but hopefully one will come along with this journey.

What would you most like to do in culinary arts when you graduate?
After I graduate, I would love to be able to travel. It would be an honor to be able to work hands on with local chefs and ingredients to get a real understanding of each regional cuisine. After traveling I would like to find a restaurant to work in, while I save money in order to maybe one day open my own restaurant.

What is your favorite restaurant in Richmond?
I honestly haven't been able to frequent many restaurants. I did get a chance to stop by Croaker Spot and it sure was a treat!

Posted by Reynolds Community College at 11:35 AM