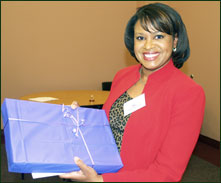 JSRCC’s Multicultural Enrichment Council recently sponsored “Empowerment: Connecting the Past, Present and Future” in honor of women’s history month. Guest speakers from the Virginia Latino Higher Education Network, the Commonwealth of Virginia and the Virginia Court of Appeals led a panel discussion about their journeys to success and their views on women in the modern world. CBS 6’s Reba Hollingsworth facilitated the discussion. An afternoon panel consisted of female students from Reynolds, University of Richmond, and Virginia Commonwealth University. Students shared their stories and aspirations from the perspective of young women on the verge of entering the workforce. Following the panel discussions, Richmond’s own Debo Dabney Trio played with singers Desiree Roots Centeio and Marie Goodman-Hunter in a “Salute to Women in Jazz.”
Posted by Reynolds Community College at 7:32 AM

Reynolds teams with Synergy Racing for Porsche race at VIR 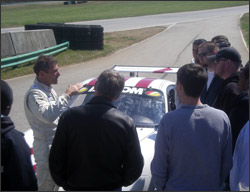 J. Sargeant Reynolds Community College Automotive students served as honorary pit crew members for the Reynolds number 81 Synergy Racing Porsche GT3 during the Grand-Am Rolex Series Bosch Engineering 250 race at Virginia International Speedway this past April. This opportunity was made possible by a generous sponsorship from a JSRCC Foundation Board member. The distinguished Bosch race was also aired live on the SPEED channel.
As part of a special topics course at the College this spring, led by JSRCC Automotive Program Head Kelly Schwendeman, students had been learning about the complexities of motor sports cars. In addition to having the Porsche outfitted with the Reynolds logo and colors during the race, several automotive students toured the Synergy Racing shop and receive a hands-on look at the Reynolds Porsche. During a road test prior to the race, students were invited onto the track and met well-known Porsche driver, David Murry.
The Reynolds Porsche incurred mechanical difficulties throughout the day and finished 18th in the 19-car Bosch Race. Yet students felt the challenges that Synergy faced to keep the car on the track were among the best learning opportunities the entire experience could offer.
"Five people can work as one person, all seamlessly," says one student. "[Someone needs] a tool and it's already on its way."
>> see the video

Posted by Reynolds Community College at 6:16 AM