Around the World Through Books

“Around the World Through Books” discusses a theory about globalization and soccer
The JSRCC Multicultural Enrichment Council (MEC) encourages cultural diversity throughout the Reynolds campuses and communities. In addition to speakers like Kevin Powell, the MEC organizes the College’s Cinema Series as well as the “Around the World Through Books” discussion series which recently hosted a discussion on How Soccer Explains the World: An Unlikely Theory of Globalization by Franklin Foer.
According to an Amazon.com book review, “…in Europe, South America, and elsewhere, soccer is not merely a pastime but often an expression of the social, economic, political, and racial composition of the communities that host both the teams and their throngs of enthusiastic fans…. Foer draws the reader into these sport-mad societies…”
JSRCC faculty member Jena Morrison facilitated the discussion and JSRCC student Jeferson Alvarez presented information about the role of soccer in his home country of Honduras.
Posted by Reynolds Community College at 10:07 AM

A Year of Food Life 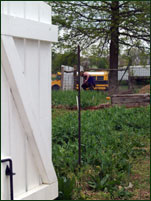 The JSRRC Multicultural Enrichment Council recently hosted the latest “Around the World Through Books” discussion on Barbara Kingsolver’s Animal, Vegetable, Miracle: A Year of Food Life on the College’s Western Campus in Goochland County. Kingsolver’s book chronicles her family's adventures in fulfilling their vows of eating locally for one year by farming in rural Virginia. It presents the economic, social and health benefits of eating local foods through touching human stories. Cindy Conner, Reynolds’ own horticultural instructor and advocate of sustainable agriculture, facilitated the discussion with both knowledge and passion.
Attendees preceded the book discussion with a tour of the College’s BIOINTENSIVE sustainable garden – managed by Conner and the JSRCC Sustainable Agriculture Club. For more information about the College’s “Around the World Through Books” series, visit www.Reynolds.edu/book.
Posted by Reynolds Community College at 7:34 AM