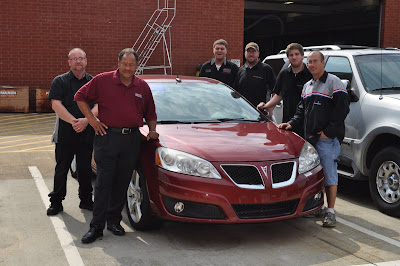 Automotive students at J. Sargeant Reynolds Community College will have two new vehicles to work on this fall. General Motors (GM) recently donated a 2013 GMC Sierra Pickup and a 2009 Pontiac G6 to the General Motors Automotive Service Education Program (GM ASEP) program at Reynolds.  These vehicles will be added to the existing inventory of GM vehicles at the automotive training facility on the Goochland Campus and will be used in classes to help train the skilled technicians of tomorrow.


The GM ASEP program incorporates the most advanced automotive technology with a strong academic foundation that enhances analytical and technical skills. Students earn an associate degree while working and learning on the job. The result is a solid education combined with invaluable work experience for GM dealerships.


The 2013 GMC Sierra Pickup, equipped with the latest in technology and systems, was damaged in a train derailment during transportation and as a result was donated to the College for training automotive technicians. The 2009 Pontiac G6 has less than 700 miles on its odometer.


Lorenza Dickerson, who has been instructing students in the GM ASP program since its inception at Reynolds in 1999, will utilize the vehicles in teaching the courses required to meet GM technical training requirements.  Under his guidance students will have the opportunity to closely examine and diagnose every component system both vehicles have to offer.


“We are very grateful for this generous donation from General Motors which will enable the current and future automotive students to experience hands-on classroom skills” noted Alan Crouch, GMASEP Coordinator and Co-Program Head of Automotive Technology.


“We are proud to support training programs that prepare the next generation of automotive technicians,” said Todd Dawn, GM ASEP and AYES Program Manager. “Our commitment to our customers goes well beyond building a quality product.  Our dedication to excellence starts at the training level by partnering with schools in communities around the globe to share our collective passion for the automotive industry and educate, inspire and motivate the technicians of tomorrow.” 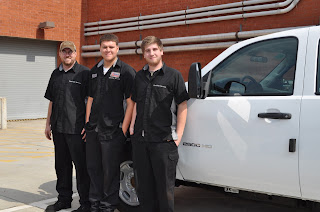 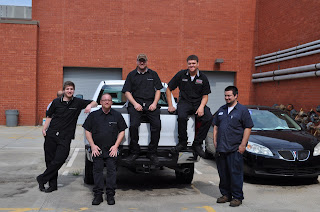 Ford gets a Dream Job at Ford

Doug Ford inherited his passion for automobiles, Fords to be exact, from his grandfather who worked 34 years as a mechanic at a Ford dealership.  Even as a child Doug was fascinated by automobiles and wanted to understand what made them work.


After graduating from J.R. Tucker High School in Henrico County, Doug chose J. Sargeant Reynolds Community College for two reasons.  First, he wanted to study automotive technology, and Reynolds offered the Ford Automotive Student Service Educational Training (ASSET) program which provides an automotive education focused exclusively on current Ford products. Secondly, he was offered a full scholarship so the stress of paying for college was eliminated.
Arriving at Reynolds, Doug immersed himself in college life while excelling in his automotive studies. He served as a student ambassador, participated in the JSR Lead Program and served as vice president of the student council on the Goochland Campus.  He joined and remains a board member for Project STIR (Sustainable Transportation Initiative of Richmond) whose goal is to make the Greater Richmond Region the national model in building an innovative, sustainable transportation system that moves people in a greener way.
One of Doug’s instructors, Michael Trapani, recognized his talents and encouraged him to continue his education beyond automotive technology to the field of engineering. Doug quickly realized the value of having a “Plan B” for his future and after earning his Associate in Applied Science in Automotive Technology, he returned to Reynolds to earn a second Associate degree, this time in Engineering. He then transferred to Virginia Commonwealth University to pursue a Bachelor’s degree in Mechanical  Engineering, with a goal of completing his education in December 2013.
While a student in the Ford ASSET program at Reynolds, Doug was required to work at a Ford dealership - it was at this time he met a Field Service Engineer from Ford Motor Company in Detroit.  Field Service Engineers (FSE) travel to dealerships as technical specialists to diagnose problems and assist local mechanics when there is an issue the local mechanic can’t resolve.  Intrigued by the position, Doug asked the FSE about his position and how he acquired it.  The FSE gave Doug the contact information for the recruiter who had hired him and suggested he contact her.  Doug made the inquiry, sent a resume as requested, then traveled to Detroit for an interview, and in the end was offered a position as a service engineer in a call center.  The service engineer’s role is to diagnose and resolve problems for mechanics over the phone.  If they are unable to do so, a field service engineer is dispatched to the dealership.
Doug realized that this was not only his dream job, but an opportunity that might not come again.  He moved to Dearborn Michigan in mid-June and has been on the job since.   Although he won’t be graduating from VCU in December as planned, Doug has already made arrangements to complete his mechanical engineering degree by next spring at a college in Michigan.
Doug noted, “Reynolds opened so many doors for me, and they are still opening.  I had so many experiences that I would never have had if I went to another school.  Attending Reynolds was a fantastic experience and the best decision I ever made.  I am now the school’s biggest advocate, recommending it to others at every opportunity.”
Doug has given back to Reynolds as well.  This spring he was part of a team of four VCU students who designed and created a self-parking golf cart with the ability to park itself simply with the press of one button.  The project, a collaborative effort between VCU and J. Sargeant Reynolds Community College, was one of the projects displayed at VCU’s School of Engineering Senior Design Expo 2013.  The golf cart now resides at Reynolds where future automotive students will use the vehicle as a lab tool for a new course entitled Automotive Electronic Guidance Control Systems. Ford noted, “My first degree at Reynolds was in Automotive Technology, so it means a lot to me to be able to give back to future Reynolds students so they can learn and grow as technology evolves in the auto industry.”
One can’t help but wonder with the last name of Ford, if Doug is any relation to that “Ford” family, but he said there is no relation that he has been able to find, at least not so far.


Posted by Reynolds Community College at 11:08 AM 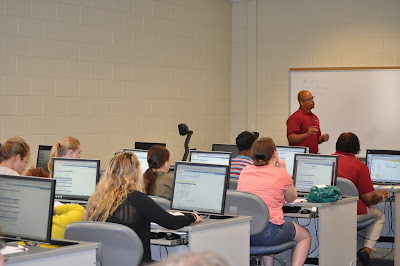 With a new semester right around the corner, J. Sargeant Reynolds Community College begins Student Orientation and Advising and Registration (SOAR) and SOAR Express sessions this week for students who will be starting classes at Reynolds this fall.


While starting college is an exciting time for new students, the transition to post-secondary education can be challenging.  To assist with this transition, students new to Reynolds have the option to attend an orientation session to receive academic advising and to register for fall classes.  Students choose between two types of orientation programs - SOAR or SOAR Express.  While SOAR is a comprehensive, half-day program for new students and their parents or guests, SOAR Express is a 2-hour program for new students that focuses on the nuts and bolts of registering for fall classes. 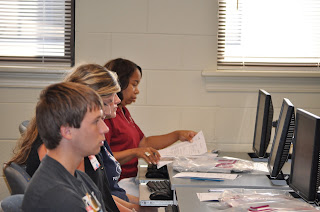 Prior to attending SOAR & SOAR Express new students must take the placement tests at one of the campus Testing Centers, set up their username and password in SIS, and follow-up with Financial Aid if they have any questions about their financial aid package.
As you can see from these pictures from a SOAR Express orientation session, it may still be summer, but school is definitely in session at Reynolds!
More information about SOAR and SOAR Express can be found online at http://www.reynolds.edu/studentaffairs/orientation.htm. 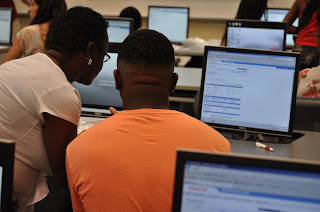 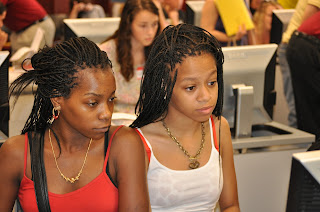 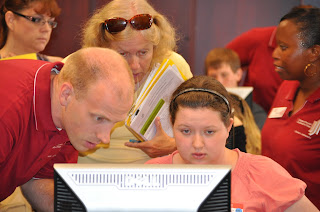 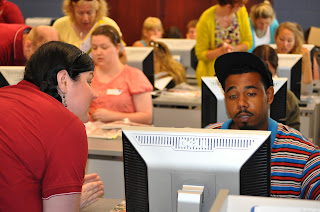 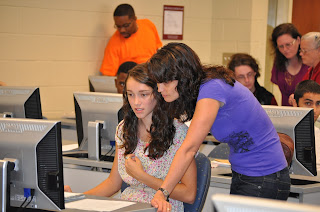 Posted by Reynolds Community College at 11:08 AM