The findings of the October 18 on-site review were overwhelmingly positive and the lead reviewer noted, “This program is a shining example of how it can be done.”  Other reviewer comments included:


•             A very progressive program that teaches the very latest technology using the latest state of the art equipment and methods.


•             The programs are very well organized and staffed with excellent personnel.


•             The automotive department head and instructors have gone above and beyond to develop and improve the curriculum.


“The NATEF accreditation process ensures that the Reynolds Community College automotive technology programs are of the highest standards.  We are pleased with the results of the accreditation renewal process and look forward to continuing to offer cutting edge educational opportunities to our students,” noted Kelly Schwendeman, Program Head, Automotive Technology. 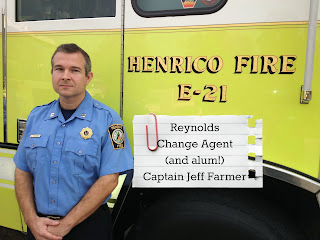 Reynolds Change Agents is a new spotlight series in Campus Happenings highlighting the spirit of service and philanthropy by and for Reynolds Community College.

This week, see why riding the bucket truck was just one of the highlights at a recent visit to Henrico County Fire Station E-21 by the Innsbrook Rotary, and learn how these (adventurous) Rotarians are making a difference for students.  Watch the story here.

The Educational Foundation is tremendously thankful for the support we receive from local Rotary clubs to help students achieve their goals.
Posted by Reynolds Community College at 5:53 AM 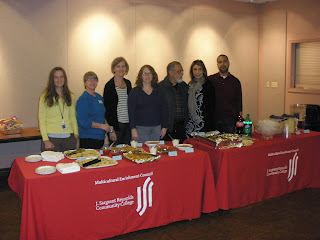 
Sin Nombre is about a beautiful young Honduran woman, Sayra, who joins her father and uncle on an odyssey en route to the United States seeking the promise of America. Along the way she crosses paths with a Mexican gang member who is trying to outrun his violent past and elude his former associates. Together they must rely on faith, trust and street smarts if they are to survive their increasingly perilous journey towards the hope of new lives.
Carlos Ossandon, Assistant Professor of Spanish led pre and post movie discussions that highlighted migration versus immigration as well as driving forces and causes behind Hispanic immigrants in the U.S. He also shed more light on some fascinating statistics on various immigrant populations from Central and South America in the U.S.
The audience enjoyed a variety of refreshments from El Salvador.  The movie was followed by a post discussion where many students and staff won prizes including many items donated by the Reynolds bookstores and the Office of Marketing. 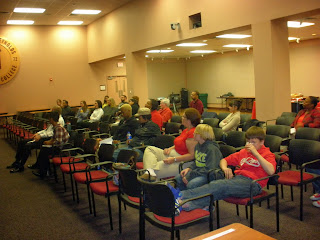 J. Sargeant Reynolds Community College’s Chapters of Phi Theta Kappa International Honor Society held their annual fall induction ceremony on Saturday, November 2 in the Lipman Auditorium of the Massey Library Technology Center at the Parham Road Campus. Students who have completed 12 transferable credit hours and have a 3.3 cumulative GPA at the college are invited to join PTK every fall and spring semester.


Alpha Iota Beta Chapter President Tiffany Plumber opened the festivities and Reynolds President Gary Rhodes welcomed the audience. 117 new members were inducted, many of whom participated in the ceremony.


Ms. Dawn Beninghove, founder of Companion Extraordinaire Home Care Services, delivered a motivational speech as the keynote speaker, emphasizing the importance of being both a leader and a servant. Beninghove graduated from Reynolds in 1981 with a degree in nursing.


“You are here because you have recognized that academic achievement is a plan that gives you a hope for your future,” Beninghove explained to the inductees. “PTK provides an opportunity for you to develop your leadership skills and continue on this path of academic excellence.”


In closing Beninghove stated, “Never, ever underestimate the power of a plan no matter how humble it’s beginning. Each time you learn something new, the world around you becomes richer and fuller of opportunities at every turn. Life can only be completely understood looking at it backwards, but must be lived forward…..live forward every day.”