Called Up to the Big Leagues


Reynolds Honors Students Get Their Shot

NASA is the Big Leagues. For STEM and STEAM students, it’s the NFL, the NBA, and the NLB all rolled in to one.

NASA offers a galaxy of student programs and, as the agency greys, it admits aggressively seeking its next generation of space junkies. Still, getting accepted into a NASA program is akin to being called up to the Big Leagues. Literally thousands of students apply for each internship, fellowship, workshop or competition. And, the chance of being chosen to participate is only slightly greater than getting a big league contract.

Given these odds, it’s all the more impressive that two Reynolds Honors students have been accepted into separate NASA programs for the spring and summer of 2019. Another Reynolds student, Emily Krause, was also accepted into a NASA program.

In mid-February Reynolds Business Administration and Honors student Ryan Lingo was accepted into a NASA Internship program AND an Internship with VSGC (Virginia Space Grant Consortium). Ryan has accepted both, and will be working both this coming summer.

At the beginning of February Reynolds Geology and Honors student Joe Kreisa was accepted into NASA’s L’SPACE (Lucy Mission) Virtual Academy. This is the second time Joe has been accepted into a NASA program.


EmilyKrause’s story is available on the Reynolds blog.

Ryan Lingo is as sure as the sunrise that he wants to work for NASA. He has set his sights on playing for the NASA team. And that’s that. He follows the “work hard” advice given to all pursuing a dream, but Ryan is no dreamer. Ryan is a worker. Consider what he has done already:

May 2017: Fresh out of high school Ryan is offered and accepts a summer internship* at NASA’s Langley Research Center. He is the only high schooler among the group of undergraduate and graduate college students, and he says, “I had to work hard to catch up.”

February 2018: Ryan serves as an advocate for NASA at an Aerospace Conference held at the State Capitol in Richmond. At the time he was in his second semester at Reynolds and had just been accepted into the Honors program. He was (and still is) an active Eagle Scout, and an active volunteer with NASA Langley, VSGC, and the Science Museum.

March 2019: Ryan earned himself not one, but two space-related summer internships. He doesn’t expect to get any sleep during those three months.

Ryan is thoughtfully focused, but has sought advice on his direction. “Everyone wants Analytics,” a NASA contact instructed him. Ryan made a course correction and is now headed for William & Mary’s Business School and a major and minor in Analytics.

“That’s what I want to do at NASA,” says Ryan. He sees himself in a position where he can use his talents in both analysis and communications. “I’d be involved with everything – marketing, outreach, communications, event management, legislative representation, public relations, and more – everything that isn’t hard science. I love working with people. I love working with kids.”

What advice does Ryan have for incoming Reynolds students? “Learn how to network in the classroom - "classroom networking". Making yourself known to the Professor and other students can drastically raise your chances of success in that class. It also helps prepare you to network in the professional world as well.”

We expect to see Ryan conducting a live broadcast from Mars in the future.

* NASA Internships are paid educational, hands-on experiences that give students the opportunity to work at the NASA Langley Research Center in Hampton, Virginia. Interns conduct research and work on projects side-by-side with NASA’s finest scientists, researchers, engineers and mission support teams. After the program, interns are encouraged to visit schools and other science venues to talk about their experience interning at NASA, and become NASA ambassadors. 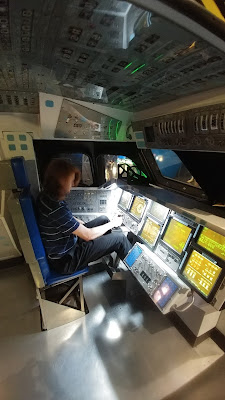 “I’d love to be at NASA, but I understand I cannot always get what I want,” says Joe Kreisa. Joe is a realist. A hard-working realist with just the right amount of “dreamer” to make him a perfect NASA candidate. Being diagnosed as a Type 1 Diabetic has forced him to be realistic but, it hasn’t stopped him. “I look at what I can do, what I can commit to do, not what I can’t do.”

Joe’s participation in L’SPACE Virtual Academy* is his second acceptance into a NASA program. His first online project lasted four weeks in the fall of 2017.

Joe participated in the same NASA National Community College Aerospace Scholars (NCCAS) program as Emily Krause. "I drove to Kennedy Space Center and spent four days participating with a team of peers on project tasks. I also got to visit parts of the KSC that a normal tourist would not get to see."

He was such a stand out in the program he was invited into another project onsite at the Kennedy Space Station. At Kennedy he was part of a team that built "a purpose drive, computer coded Lego Mindstorm robot". He pulls out his phone to present the pictorial evidence: a gigantic room with intent students gathered around a test launch pad. “I was the execution guy. I got to push the buttons when it came time to give the rover instructions. I do not need to emphasize my role, I was more excited about the teamwork and networking with some of the coolest and smartest people I know.”

In the Virtual Academy Joe is working online on a PDR – a Preliminary Design Review – with 400 other students around the country. Joe is on a team with eight other students that compete with about 50 other teams in the program. Each team is challenged to make the best PDR, in this case a report about a Lander that has to make it to Mars to find potential landing sites for astronauts. A PDR is one step in determining if a proposed plan is viable. The work includes all aspects of project management such as scheduling and budgeting, all the way down to the tiniest details. The team uses a robust project management tool to keep up with the thousands of details, documents and assignments. Should Joe be successful in this Level 1, he will be eligible to continue to Level 2.

"Until last semester I wanted to experiment in Applied Physics. But, through my experience of an Honors Contract Geology Course with Professor Layou I found a passion to understand the Earth's processes." Joe is headed for graduation from Reynolds in the fall of 2019, then like Ryan Lingo, he is off to William & Mary to pursue his bachelor’s degree.

“Reynolds Honors classes are AWESOME,” Joe beamed, “They are better than any other college class I’ve had [Joe attended George Mason University before coming home to Reynolds]. Classes are small allowing them to focus on understanding and discussing class topics. These classes have given me more tools to tackle my college experience.So far, I have used the tools I have developed in order to succeed. I recognize and record my success in tattoos. Tattoos earned by receiving all A's in a semester. I have six tattoos so far and I look forward to earning my seventh at the end of this semester.' ”

What advice does Joe have for incoming Reynolds students: “Do not be afraid to take chances. I took a chance applying to the Honors Program and it has quite literally paid off.”

*The Academy is funded by The Lucy Mission which is NASA’s first spacecraft to explore the outer Solar System asteroids known as the Jupiter Trojan Asteroids.  The mission is named after a fossil discovered by Donald Johanson and Tom Gray in the 70s. Just like that fossil, Jupiter Trojan Asteroids are the fossil remnants of the early Solar System and will provide important keys to understanding the formation and early evolution of our Solar System. Lucy will launch in October 2021 on a 12-year trip. “No other space mission in history has been launched to as many different destinations in independent orbits around our sun.”

Posted by Reynolds Community College at 9:40 AM