Richmond is a growing place. Urban gardens spring up in warehouse districts, next to parking lots, and within a tomato’s throw of busy interstates. Breweries? Ten years ago Richmond had one. Now there’s 30. Coffee shops and roasters. Specialty packaged foods from A to Z. And restaurants? A world of foods are around every Richmond corner.

Ever wonder how these businesses get started? Blood, sweat, tears, seat-of-the-pants learning, desperate appeals for money, wings and prayers? Not anymore. Now fledgling foodie dreamers have a nest they can feather before taking flight. Now they have Hatch Kitchen RVA.

“Hatch Kitchen RVA is a food and beverage business incubator,” says Ryan Evans, Reynolds Culinary Arts graduate and Director of Kitchen Operations at Hatch Kitchen RVA. “We do have a full commercial kitchen, but the shared kitchen is only part of what we do. We offer classes through Startup Virginia and The Apple Cart with instruction on just about every aspect of starting and running a food business. We have 75 mentors - consultants in marketing, branding, accounting, law, and governmental regulations - who are available to answer members’ questions and sort out start up issues. One member had confusing legal and accounting issues, and we were able to help him. Having this access to knowledge and advice can save a start-up thousands of dollars, and probably millions of headaches.” 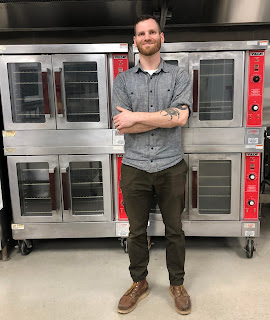 “Our members dream of starting a food business,” Ryan continues, “we dream of helping them do that. We don’t expect them to stay. We give them a place to operate while they learn and grow their business, then we will encourage them to go. Members come to us with varying skills and needs. Nightingale Ice Cream is here. They are a strong, viable business selling their ice cream sandwiches in stores in several states. But, then there are members who have left their day jobs to pursue an idea and are starting from scratch.”

From his own experience, Ryan has a deep understanding of this start up process. When he came to Reynolds he had been around the food business most of his life. Reynolds gave him the opportunity to make a career out of his passion rather than just work in a kitchen. “It was a great, pivotal time in my life,” Ryan said. “I was going to school full-time and working full-time as a sous chef. For my internship, the restaurant saw I didn’t need kitchen experience so I spent my time working in the office. Much of what I learned then I use every day. Many of my classmates didn’t like the desk-based classes like accounting, but those have been the most valuable for me. I use those skills to save money. There is more to the food business than food.”

Ryan credits Chef Jesse Miller with showing him just how many career options there are in the food business. “Chef Miller told us we didn’t have to be just a chef. He encouraged us to think bigger. He brought in speakers and took us places to show us what was possible. At first I said, that’s not me, I wanted to be the chef. But, I began to realize how valuable that perspective really is.”

Ryan continued to work in restaurants and bakeries after graduation, he became a cheese monger, he helped several small restaurants get up and running, and he was an independent restaurant consultant. He was working nights and weekends and stayed home during the day take care of his young family – one son, and then a set of twins – when a friend told him about a couple of guys who had an idea. They wanted to help food service businesses get started. “They don’t have restaurant kitchen experience and they’re having issues,” the friend said. That “idea” was Hatch Kitchen. Ryan started as a consultant and quickly became Director of Kitchen Operations. He says, “I’m excited to have gotten this long term career opportunity.”

“Chef Miller taught us to focus on the details. Not just the details of the food. But, efficiency. Cost. Cleanliness. Everything matters. He had a strict dress code. Students would ask, “Who cares what I wear, I’m just cooking,” and Chef would explain how every detail mattered. You’ve got to look good, too. In this position at Hatch I apply that discipline to our operations, I can also share that kind of lesson with those who are just getting started.”

Like its members, Hatch Kitchen is just getting started, and Ryan finds himself nurturing his own start-up process. “Expansion plans include a multipurpose Café where members can eat and conduct business, but would double as an event space where members can cater events, showcase their products, or if they have a food truck, they can test out what it would be like to have a brick and mortar location. We want to make this space as utilitarian as possible. We are also adding private work areas, small rooms, where members can customize their own dedicated space and have more control. This is particularly important for packaged goods.”

Here Ryan laughs and gets a little breathless, “As Hatch Kitchen grows I’ve had to learn to be a general contractor and a tradesman, an electrician, a plumber, and everything else. I don’t just give members tours and solve their problems, I also oversee the progress of construction. I’ve learned so much over the past year and gained tremendous confidence. There is much to do and the days are very busy with a multitude of tasks, just like in a restaurant. It’s been a wild ride.”

Richmond is indeed a growing place. And its growth has always started with a seed, an idea, a hope, or a dream. Now there’s help. Now there’s a nest. Now there’s Hatch Kitchen RVA. And it’s all about hatching dreams.

Posted by Reynolds Community College at 7:46 AM