A Positive Spirit Simmers in The Kitchens at Reynolds

I hope all is well with you, Chef. In the past few years since talking with you, I've established myself fairly well in the Roanoke area.  I'm currently, the Executive Chef at Billy's (www.billysroanoke.com).

I try to continuously learn something new every day, but the techniques and fundamentals that I was taught at Reynolds have proven extremely valuable.  I do always love to show up the "know it all" line cooks, with the French name of what they are trying to impress everybody with.  I've won two local competitions and one regional chef competition, been on the news more than ten times, and most recently I was offered a new position as overseer/consultant for seven establishments.

I consider you, and the education I received at Reynolds, a massive contributing factor to my success.  I greatly appreciate what I've learned from you, and wanted to reach out to sincerely thank you for the knowledge.  I hope you have a good holiday season. 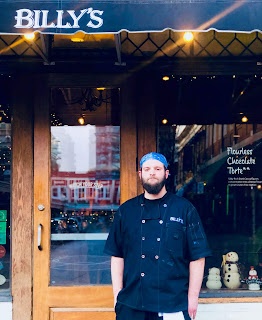 Students past and present will quickly tell you the Reynolds Culinary Arts Program is something special. That alums like Dave Hirshman write to say “Thank you” is a testament to the lasting positive spirit that starts simmering in the Reynolds kitchen during their studies. Years later students recall lessons they learned, their cooking successes and tragedies, and they never fail to remark on how incredibly prepared they were to face the rigors of their culinary careers.

Dave Hirshman left his home in Newport News to study business at Virginia Commonwealth University. After earning an undergraduate degree in business management and spending a few years in the corporate workforce he said, “I went back to the kitchens.” He liked the work, he liked the atmosphere, and after researching his culinary education options, he chose Reynolds.

After graduation, romance took Dave to Roanoke, Virginia where he immediately took a position as a line cook and sous chef. Six months later he was notified by text message that the restaurant he was working in had closed. Finding restaurant work again was easy, but it wasn’t until Billy’s – the number one restaurant in Roanoke – that he found the right restaurant. Two years later, Dave is both Executive Chef at Billy’s and has been offered a position as a consultant for seven of the other restaurants in the Billy’s group.

Chef and consultant are only part of Dave’s work. Dave has become the “face” of Billy’s. He has appeared on television more than ten times to demonstrate everything from simple food preparation to a segment on what to do with Thanksgiving leftovers. He has gone spatula to spatula with some terrific chefs and has won local and regional cooking competitions. “I learned how to keep my cool at Reynolds,” says Dave, “Chef Jesse taught us to focus on what we are doing, focus on the food, and it takes off the stress. Whatever else is going on, stay focused on the food and we’ll be okay. Chef has so much life experience to share with students. If you listen, you take away so much more than just the textbook and preparation. He can tell you how to run things.”

Dave’s days are long, but he says Reynolds prepared him for that too. “Chef Jesse’s work ethic is incredible. To watch someone work that hard, and work all those hours, is truly motivating.” Dave puts in his hours too, beginning at 9:00 a.m. with preparation for lunch service that runs until about 3:00 p.m. He then sits down to administrative duties until 5:00 p.m. and afterwards heads back to the dining room to observe the servers and take notes he will share later. Between 8 and 9 p.m. is “Table Touch” where Dave meets and greets diners and asks about their experience at Billy’s.

“Anyone can work in a kitchen,” Dave says, “but without education, staff lack the root of understanding. The Reynolds Culinary program breaks down the how and what of the work so students get a complete understanding of the business. Graduates can go anywhere, in any restaurant, and immediately feel comfortable and confident with their skills.”

“My favorite part of the program was the capstone class at the end. We were given the liberty to design the entire menu, do all the costing, ordering, and planning, just as it is done in the industry.” Dave admits a couple of his courses were “tragic” at the beginning, but with Chef’s help, they were much improved the second time around, and he learned a lot from the trial and error it took to get it right.

And the best part of a career in culinary arts? “Being a chef allows you to use your artistic expression and creativity. The industry has changed so much in the past 20 years. It has gained respect and is revered now as a career. I see customers from all over the world – CEOs, COOs, all kinds of important people – and they show their respect. It’s personally satisfying that they ask questions and listen to what I have to say.”

From Dave’s experience it’s clear it takes more than a sharp set of knives to be successful in the culinary field. Just as important are: staying cool under pressure, the ability to manage people and food, and excellent communication skills. “Don’t think you know it all either,” says Dave, “Learn something new every day. And, most important, don’t let your ego get ahead of you.”

Sounds like wisdom straight out of Chef Jesse’s playbook.

A note about Billy’s:
Billy’s was voted the number one restaurant in Roanoke and gets a rating of 4.5 on review sites such as Trip Advisor and Open Table. The restaurant got a makeover in 2009 and has been a popular dining destination ever since. The cuisine is American with a distinctly artistic twist, no doubt the handiwork of Dave Hirshman.

Posted by Reynolds Community College at 7:04 AM