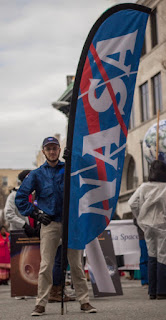 Reynolds Honors student Ryan Lingo will serve as a NASA Advocate at the annual Aerospace Day Conference held at the Richmond State Capitol during the General Assembly session. The daylong event this year takes place on Wednesday, February 7. Organizations taking part in the event are Virginia Aviation Business Association (VABA) and the Virginia Commercial Spaceflight Authority along with the NASA Langley Research Center and NASA Wallops Flight Facility. The conference is intended to show Virginia’s state legislature how Aerospace is benefiting the state financially, socially, politically and educationally.

As an Advocate during the Aerospace Day Conference Ryan will visit delegates, senators, congressmen and others in attendance to demonstrate how NASA and the Virginia Space Grant Consortium (VSGC) have shaped his life and why these institutions are vital assets to the state.


Ryan is finishing his first year at Reynolds and is seeking a degree in Business Administration and Management. He was accepted in to the Honors Program for the 2018 Spring Semester. He is also an active member of the Boy Scouts of America with the following designations: Boy Scouts of America (Eagle Scout), Order of the Arrow (The Boy Scouts’ Honor Society), and the National Eagle Scout Association. Over the past few years Ryan has periodically worked with NASA Langley and VSGC during events such as Aerospace Day. He has been a volunteer at the Science Museum of Virginia for four years where he leads exhibits and activities for events such as the museum’s Space Night.
Posted by Reynolds Community College at 6:35 AM