Reynolds Community College will host author Benjamin Campbell for an “Around the World Through Books” discussion on Thursday, February 8 from 7 to 8:30 p.m. in the Parham Road Campus Massey Library and Technology Center located at 1651 E. Parham Road in Richmond. This event is free and open to the public. 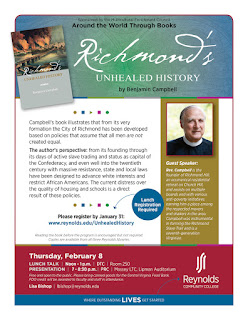 In a detailed look at the history of Richmond, Campbell’s book examines the contradictions and crises that have formed the city over more than four centuries. During the evening’s event, Campbell will discuss his hope for Richmond as he believes the city, more than any in the nation, has the potential for an unprecedented and historic achievement – that its citizens can redeem and fulfill the ideals of their ancestors, proving to the world that race and class can be conquered by the deliberate and prayerful intention of honest and dedicated citizens.

A native of Arlington, Virginia, Campbell studied political science and political economy at Williams College in Massachusetts, and studied theology as a Rhodes Scholar at the Queen's College in Oxford. He received a master’s in divinity and an honorary doctorate in divinity from the Virginia Theological Seminary. He was ordained to the priesthood of the Episcopal Church in 1966 and has lived in Church Hill since 1970.

The program is a free community event sponsored by Reynolds Multicultural Enrichment Council for the purpose of encouraging cultural diversity throughout the Reynolds campuses and communities.
Posted by Reynolds Community College at 9:00 AM