When Benjamin Campbell, author of Richmond’s Unhealed History, spoke at two events in the Around the World through Books series on February 8, he came with an agenda. Campbell, who has lived in Richmond and served as a priest at three Episcopal churches since 1970, has a mission to bring better opportunities to the people of the city, especially those living in neighborhoods dominated by public housing. 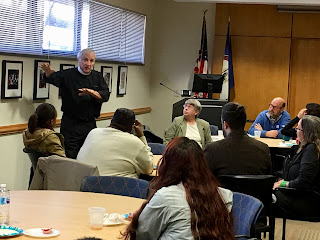 In two sessions - a luncheon at the Downtown Campus and an evening presentation in Lipman Auditorium on the Parham Campus - Campbell traced 400 years of state and city policy designed to suppress opportunities for African Americans. Richmond’s unhealed history includes a slave market, a series of urban renewal projects that destroyed African American neighborhoods, and a public transportation system that mostly does not cross into neighboring counties - limiting access to jobs and higher education.

“This is not flat land we are living on,” he said. “It is crooked land, and we cannot rest until it is flat.” Campbell works with RVA Rapid Transit, a grassroots organization serving Metro Richmond, which promotes a regional transit system (rvarapidtransit.org); he asked the audience to visit the website and support the cause.

Around the World through Books is sponsored by the Reynolds Multicultural Enrichment Council.
Posted by Reynolds Community College at 1:16 PM