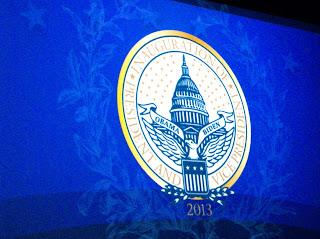 The students were responsible for their own transportation to Washington, and the group assembled to watch the Inauguration which started at 11:30 a.m.
“This was a great opportunity for our students to be so close to the President, Vice President, Senators and other dignitaries and to witness the swearing in of our first African American President on Dr. King’s Birthday,” Dedra Hampton noted. “The students were really impressed that the President held the same bibles used by Abraham Lincoln and Dr. King for his swearing in.”
In addition to attending the inauguration, the group attended an Open House hosted by the Casey Family Programs, an organization whose mission is working to ensure that every child has a safe, nurturing, and permanent family.  At the Open House the group met other foster care youth and alumni representing four different states, and they had a chance to network with representatives of The Rising Tides, an organization that provides numerous financial benefits to foster youth, and The Foster Club of America.
For more information on the Great Expectations program please visit http://www.reynolds.edu/ge/default.htm or contact Dedra Hampton at dhampton@reynolds.edu.


Posted by Reynolds Community College at 8:26 AM