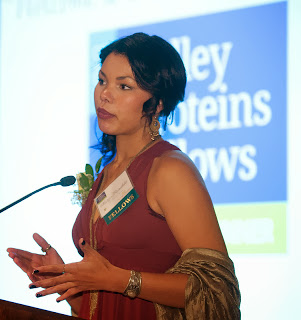 Each time Margo Fairchild enters a class at J. Sargeant Reynolds Community College, she envisions herself as an empty cup ready to be filled with knowledge.


Margo hasn’t always been so dedicated to formal education. At the end of her junior year at Massaponax High School in Fredericksburg, despite a good academic record she lost interest in school. She dropped out, earned her GED at 16 years of age, and spent the next four years working with no real plans for her future. Eventually she found herself longing for something more. She enrolled at Reynolds in the fall of 2012 where she discovered a new thirst for knowledge and a desire to pursue a career helping others. Just over a year later she’s already well on her way to that future.
According to Margo, she fell in love with her Spanish class at Reynolds. Her professor, Maria Espiritu, recognized Margo’s talent and enthusiasm and suggested she take on the role of tutoring students in Spanish 101, so Margo did just that. Margo’s hard work resulted in a 4.0 grade point average in her first year at Reynolds and induction to the PTK honor society.
In May 2013 Margo learned she had been selected as a member of the 2013-2014 class of Valley Proteins Fellows. In addition to covering the cost of tuition the scholarship program also offers opportunities for professional development, travel and cultural experiences, a stipend for an internship and a community service project. Margo credits her receipt of the Valley Proteins Fellowship to Reynolds Scholarship Manager Nichole Page who advised her of the scholarship opportunity and prompted her to apply. “The fellowship has meant so much to me, most importantly peace of mind as I don’t have to worry about working to pay for my classes, allowing me to concentrate on my studies.”
Seeking an opportunity to immerse herself in the Spanish language over the summer of 2013, Margo and her roommate engaged in a fundraising campaign hoping to raise enough funds to finance a three-week trip to Guatemala to volunteer at an orphanage with about 60 children. The fundraising campaign was so successful that in addition to financing their trip and making a financial donation to the orphanage, the young women were able to purchase Earthbox container garden systems for the orphanage. They set a goal of teaching the children sustainable gardening during their stay, with a vision of expanding the orphanage’s food supply. The gardening system boxes were shipped from Mexico to Guatemala and were waiting for them when they arrived, along with a farming specialist who traveled from Mexico to Guatemala to provide instruction in the use of the Earthboxes.
It was while she was in Guatemala that Margo was offered the opportunity, as a Valley Proteins Fellow, to attend the 2013 International Youth Organization Forum in China along with 200 other students representing 26 countries. She jumped at the opportunity. During her week-long trip in October Margo enjoyed many new experiences, meeting and exchanging ideas with students from many different cultures and visiting landmarks like the Forbidden City and the Great Wall.
Margo plans to transfer to VCU in the fall of 2014 to pursue a bachelor’s degree in International Studies with a minor in Spanish. Her long term goal is to pursue a career helping people of many different cultures, perhaps by increasing their food security through sustainable gardening. Whatever path she chooses, Margo is well on her way to a bright future.
Posted by Reynolds Community College at 12:33 PM