Virginia Governor Bob McDonnell announced the appointment of James Cuthbertson to the State Board of Community Colleges on August 16, 2013. 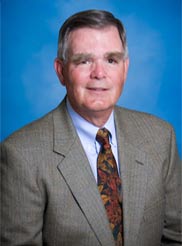 An accomplished medical entrepreneur and healthcare leader, Cuthbertson founded American Cardiac Care, Inc. a specialty healthcare delivery corporation utilizing cardiovascular physician networks and cardio-pulmonary rehabilitation facilities. Prior to that endeavor, Mr. Cuthbertson led the Texas Heart Institute, the world's largest cardiovascular care center as its President and Chief Executive Officer. Before accepting that position, he served for thirteen years as Chief Operating Officer of the Cleveland Clinic Foundation, the nation’s second largest, tertiary-care enterprise and pre-eminent research center.
Mr. Cuthbertson is recognized as a distinguished healthcare leader whose vision and leadership contributed greatly to the advancement of treatment modalities and the eradication of suffering in many of the health disciplines with which he has been associated.
Mr. Cuthbertson served as Chairman of the J. Sargeant Reynolds Community College Board from July 2011 to June 2013, and remains on the College Board representing Henrico County.  He is also a past member of the school’s Foundation Board of Trustees.
He served with distinction as an infantry company commander in Vietnam, receiving the nation's third highest award for bravery, the Silver Star. He is also the recipient of two Bronze Star Medals w/ “V” devices, three Purple Hearts, five Air Medals, a Valorous Unit Citation and the Vietnamese Cross of Gallantry.
Mr. Cuthbertson is a graduate of Kent State University and holds a master's degree in business administration from Case Western Reserve University.  He and his wife Barbara have three adult children and live in Glen Allen, Virginia.
Posted by Reynolds Community College at 11:56 AM